Today in the Legislature 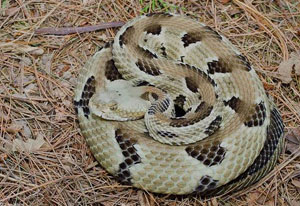 A resolution naming the Timber Rattlesnake the official state reptile passed on the final night of session. Senate Concurrent Resolution 28 was proposed by an eighth grade class at Romney Middle School in Hampshire County, and makes West Virginia the only state to name the Timber Rattler as its state reptile.

This venomous reptile is the only species of snake in the state with a segmented rattle at the end of its tail. It has brown or black chevron-shaped markings down its back - a pattern the resolution denotes as "reminiscent of West Virginia's fauna and flora". The background color may vary from bright yellow to a dull gray, but entirely black specimens have been recorded. Rattlesnakes rarely exceed six feet in length. Usually a docile snake, rattlers usually occur in remote, rocky, mountainous sections of West Virginia.

To learn more, watch a rattlesnake video from the WV Division of Natural Resources.

The resolution also named Megalonyx Jeffersonii, or Jefferson's Ground Sloth, as the state's official fossil. This giant prehistoric ground sloth was discovered in Monroe County in the 18th century and named after the third president.

Contact
Today in the Legislature is a daily synopsis of legislative activities maintained by the West Virginia Legislature's Office of Reference & Information.