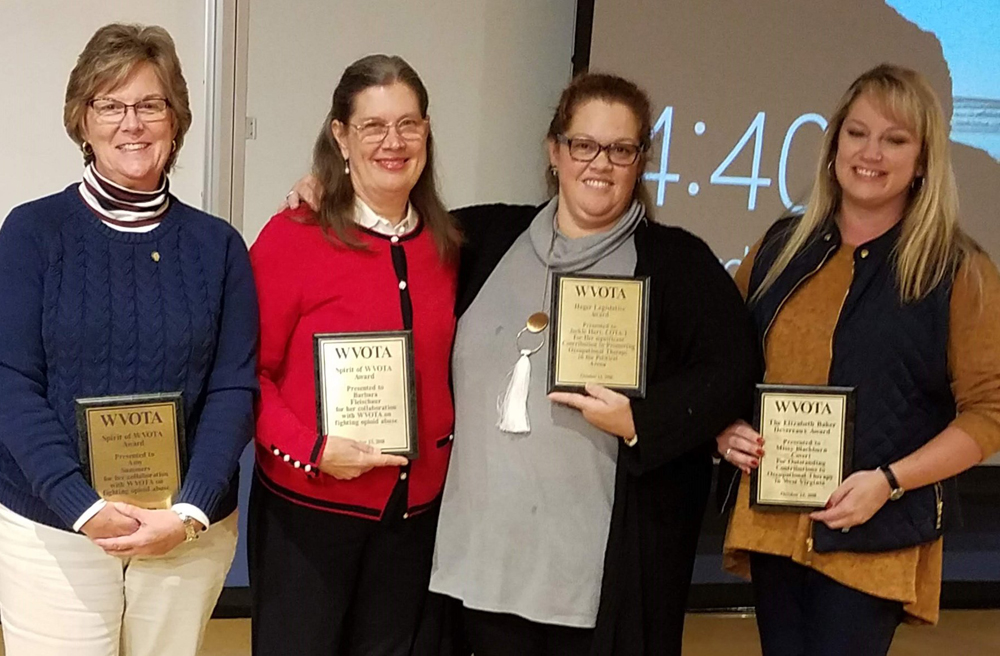 The WV Occupational Therapy Association (WVOTA) held its annual meeting at the Robert C. Byrd Health Sciences Center in Morgantown on Saturday, October 13, 2018. The organization awarded its âSpirit of the WVOTA Awardâ to the two delegates because of their work on Senate Bill 273, which relates to reducing the problems of opiate abuse in West Virginia. The Delegates made sure that occupational therapists were among the health professionals who are licensed and compensated to provide care for patients with opioid addiction.

âWe felt very lucky that one of our members was allowed to address the committee so close to the end of the session to answer questions that House members might have, â Cronin said. âSometimes there can be turf battles between different professions,â she added, â but we all need to work together to solve this terrible problem. We are grateful these two Delegates worked together to insert our profession into this important bill so that we can be part of the solution.â

Fleischauer said she shared Dr. Croninâs letter with Delegate Summers, and told her she planned to offer an amendment to get occupational therapists included in the opioid treatment bill. Fortunately, Summers had already arranged to have the amendment put into the revised bill that was considered by the Health & Human Resources Committee. Summers said she was familiar with the contributions occupational therapists can make from her work at Bridgeport HealthSouth, and that Dr. Croninâs letter confirmed the need for their expertise.

âWorking together on a bi-partisan basis is important for legislative success,â said Summers.â

âThings can get pretty tense at the end of the session, because of the time crunch of the 60 day session,â added Fleischauer. âI figured Amy Summers would make a good partner on an issue like this. We all need to be on the same team when it comes to fighting the opioid crisis.â

Pictured: Delegates Summers and Fleischauer received the 2018 Spirit of WVOTA award, and are pictured with Missy Covert, recognized for 20 years of service and Jackie Hurt, who received the Elizabeth Devereaux lectureship award.